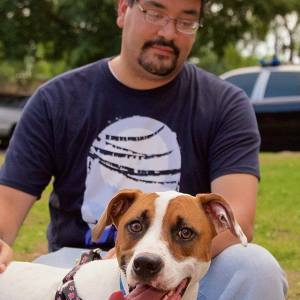 When I was born, I had no visible deficiencies or any kind of life threatening diseases. I was, for all intents and purposes, a normal kid. A few years after I was born, my mother was pregnant with fraternal twins who later became my brothers.

Shortly after their birth, one of the twins began to exhibit weird behavior and was constantly crying in pain. It turned my brother David had diabetes, type 1. If it wasn’t for the keen eye of a nurse that had seen this behavior before, we might have lost him then because neither of my parent knew anything about type 1 diabetes. A year later my other Brother Joel developed the same disease.

Because of my brothers, I witnessed diabetes first hand. My brothers’ treatments included shots, medication, and blood test strips. I watched my brothers as infants taking shots on a daily biases and saw the effort my mom had to go through to take care of her boys with the condition. In the back of my mind, I was just thankful that I didn’t have it and I prayed that I never will.

Several years of my life passed, and then it happened. On the eve of my 11th birthday, I was spending the night at a friend’s house with an unusual strong urge to drink liquids. I dreamt of swimming and wanted to inhale the entire pool. I kept asking for glasses of milk whenever I woke up, which was basically all I drank as a kid. Inexplicably, I was unsatisfying thirsty and the urge to keep drinking was uncontrollable. My friend’s mother raised concerns and informed my mother of what was happening. My mother knew the signs after all these years she had been dealing with them.

The next day, my parents took me straight to a doctor and they checked my blood sugar to verify. It was over 600. (A normal glucose level typically falls in between 80 to 120 for diabetics.) As you can imagine, that blood sugar level was life-threatening for an 11 year-old. That was when the doctor confirmed the news with me—I had developed type 1 diabetes. The doctor commented that it was strange for it to happen like this, especially since there hasn’t been any real history of diabetes in my family before then. My brothers and I were the unfortunate first.

While I was in the hospital, I noticed that I lost a LOT of weight. Without natural insulin, my body broke down some source of energy from fat deposits and muscle mass. The doctor hooked into IV machines for fluids and eventually begun to administer insulin in small doses to help my condition. Eventually, I was let go and I was allowed to go home. Thus began many years, ups and downs with the condition. Here I am now, on the eve of my 30th birthday, still dealing with the condition. To say it hasn’t been a struggle would be untruthful. But I’ve been able to handle it with support from my family and friends.

Thankfully, ever since I was first diagnosed, I’m proud to say I haven’t returned to the hospital for any kind of emergency treatment relating to diabetes. I’m not in perfect health by any means, and there have been several times where my blood sugar has gotten high or low, but I can say that I’ve been well enough to ensure I stand tall as a strong man. Thanks for reading my story. Stay blessed and stay healthy.