Even though we sounded a lot like rivals to each each other during class, when we arrived in Marriott Marquis in New York City, we were a big family. I was thrilled with how knowledgeable my professors and fellow classmates were in this field. We were able to travel together on flights, trains, buses as a single group. Together, we toured some of the most famous sites in the U.S. Moreover, we shared food, hotel rooms, televisions, and interests. The enthusiasm from both students and professors reminded me that I was not alone, and I could always get help and help others.

At the conference, when the class was divided into sections. The source of reliance decreased. On the other hand, the new source of reliance or even rivalry was entirely up to my communication skills with delegations from other schools, which were representing other countries. Growing up in two different cultures, I was excited and appreciative to hear about what each culture has to offer. It was funny to me at first when I saw delegations of Norway were from China. I was impressed, nevertheless, on how well other delegations have researched on the assigned country that they represented. Likewise, the amount of effort that my fellow classmates and I had to research on Ghana was in no lower rank than other schools’. I have learned a lot about Ghana: Ghana is not just about running hunters and wide field of grassland filled with lions and other animals. Ghana has a lot to contribute to the world, as well as other nations. At Model UN, I learned more than hundreds of nations and their stances on improving the environment, IP, and microfinance system. 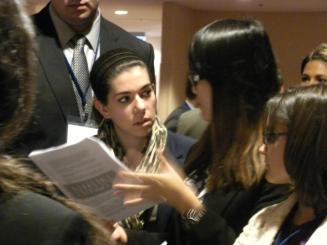 During formal session, where dais selects delegations to present speeches, a student must be quick, persistent, and consistent with their will to make motion. Even with all three qualities combined, there are still possibilities that a delegation will not be called. I was there in room with a sea full of delegations, and I witnessed that even sitting right in front of the dais, raising my placard as quickly, as persistently as I can, but their nearing eyes still became distant. It discouraged me big time. In addition, the amount of countries on the speaker’s list gave me a fright too. It seemed hopeless if I would ever get just 60 seconds for a speech. During informal caucusing, again, speed, persistence, and consistence are important. There was not a moment went by silent, even I was dehydrating myself to talk on the top of my lungs. The free water that was provided in the room drained quickly. Students brought their own bottle of water. I learned the hard way, after coughing a storm and talking non-stop for hours. Yes, that was how much effort I had to put in to get my ideas through.

Merging was a process that Kirsten mentioned how terrible it could be. However, I didn’t find that a problem at the conference. There were people open to merge, and there were people who wanted to be merged. Getting ideas through and wording it correctly were the tough parts, but after merging paper, more signatories and sponsors gathered, and thus strengthened the possibility of this draft to become a resolution. There were moments when I had to just sit alone with cups of water. After shouting directly out of my lungs, after hearing all the other shouts from others, I got a really bad headache. The process of working with a big group after merging became inefficient. Everyone had to have a say in it, and everyone had to agree, or at least come down to a compromise with others. Even during formal session, there were still paper messages passing around to discuss about the working paper. There were times when I was balled up in an isolated corner, praying this drafting part to be done. 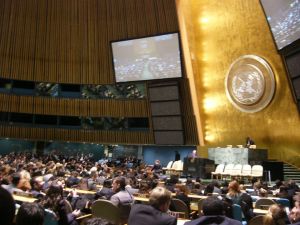 Finally, as the discussion came into a conclusion, as the working paper been revised by the dais for more than 10 times, delegation closed the debate with 2/3 majority vote and moved on to the voting procedure. Each working paper has to be voted by hundreds of delegations to become a resolution. Adopt by acclamation was the most efficient and peaceful way; nevertheless, there were always oppositions. Simple raise of the placards could quickly bring a conclusion; however, there always people who wanted to amend sentences in the working paper. Yes, I am not kidding you, even after a dozen times of revision, there were still people who wanted to change things. Each amendment requires another voting process and debate.

A miracle appeared; the dais finally saw my placard within the sea of delegates and granted me to make a 15 second speech. “Leave the working paper as is,” I said, “We are short on time and energy. Let us go through this quickly. Save a space, save paper, save money, save water.”

Everyone laughed, and my speech persuaded enough people to vote on dropping this amendment. At this point, I was drained from the head to the toe. Worst finally came to shove, a delegation move to make motion for a roll call vote. At that point, everyone gave a deep groan. Let me explain this, roll call, as simple as it sounds, is calling delegations county by country. Just like a teacher takes attendance of the class, the only difference is that this class has more than one hundred students in it. Even with the rush on time, every working paper has been voted, and there were four working paper that successfully became a resolution. We cheered and praised, but as soon as I got back to the room, I dropped dead on the floor.

The next day, not just those hundred people in my committee, but all other committees, which was around 1000 people gathered at THE United Nations Headquarters for the closing ceremony. After going through security check, we entered the building. Walking up a ramp, and then we entered the legitimate conference room, with the golden, giant MUN emblem posted at front. We had to get there an hour before the closing ceremony since we wanted to have a good spot to sit. Many other groups got separated and were forced to sit at different location; we, however, stayed together the whole way. The award winners were finally announced. Many of us won best delegation, and many of us won best position paper. All of us, as a single group, won honorable mention. Last year was our first time at the UN, and this year was our second time, and the second time in the roll that we received this award. After all the staffs and volunteers were recognized, the speaker asked if there were any motions on the floor, and one last motion was made to suspend the meeting until next year. Even though the majority of the people agreed upon this motion, there were still people voting against it. It seemed like they were attached to this place.

I walked out of this conference with a mind full of experience. I was relieved that this hard work was over. At the same time, I felt attached emotionally. It was the same feeling like back in 2009 when I had my high school graduation. I felt accomplished, I felt tired, and I felt sad, walking on top of the platform to receive my diploma was a mixture of all. Likewise, taking that shuttle bus back to the airport, back on the airplane, and back to Augusta was the same feeling.

College is not just about pleasing the professors and competing with classmates. After this trip, the fact that every student is essential to the class with his or her involvement and contribution has been made clear to me. Power of unity is magnificent;  a camp fire wouldn’t burn without every little contribution from the wood. This is the first American class that I ever had the chance to remember everyone’s name and their interest as an individual. My professors and my fellow classmates are great!